I overclocked so you didn't have to!

So if you’re looking to overclock, this is sensitive (as most Pi’s tend to be)

The absolute MAX that you can go to is 1.5GHZ. If you’re looking to do so. Open your config.txt and add the line “arm_freq=1500” - even going to 1.55 will be unstable and cause crashes. This thing already gets fairly hot with three heatsinks and a fan so I’d definitely recommend it. 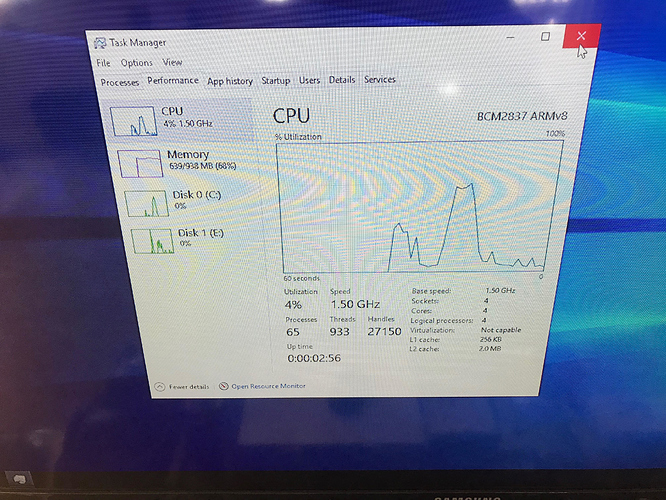 I actually had a PI die on me, I was complaining about not getting enough power with a 3 amp power brick and even underclocking it, on a 6 amp brick it was at the full clockspeed, but still wasn’t performing right and was still saying it needed more power.
I’m not sure if that was from me overclocking, but I bought a new PI and the issue is gone I’m not sure if I want to overclock this one haha

So far I’m good. I’m running on a 5A power brick without issues. Anything past 1500 wont even run though. I have a heatsink on every chip, a fan, and a great case for cooling.

1.5GHz has a few small issues, but I was able to mostly correct them by manually assigning a paging file.

I have stable overclocked 1.57GHz with passive cooling at 8C Ambient.

I performed overclocking at 1.55 with a 12 volt 2 A source with the intelligent programmable temperature control Fan + Power Hat Board | 6V ~ 14V input and works properly.

My pi can barley maintain 1.5ghz even though it has no thermal issues and a heatsink with a 12v blower. Considering that it is a old chip made with old technology i am not suprised.

important information
Please, do not run your fans off of your 3 volt GPIO header. You can and likely will damage your PI! use the 5V as that is safe to use.

Also, I overclocked my PI. Currently it’s at 1.475 Ghz and the ram overclock is set to 700. Going to do more testing and see if I can get it higher once I have better cooling (waiting on thermal tape so I can reuse heat-sinks from my old pi)

I can’t go any higher on the ram than 500 unfortunately.

Here are my overclocking settings, seems to be about the best my pi can do

You have to give the girl some serious cooling my friend.I am not bragging.I bought 3 pies,and I already had 2 pi2’s.Now this is kinda strange about what I’m gonna say,but it is true.When I bought my 3-pi 3b+'s,I made sure to get 3.5 amp psu’s.Not the wall adapter plugs.I used a buck converter so I could control voltage.I know it sounds like over kill but check this out.Both pie2’s I have will take every bit of 5-9 amps with the only issue being heat. I actually am using cut down intel heatsinks I made my self.I had the same issue a few years ago.Now for the Pie3b+,the new power management is junk in my opinion.The most power they handle makes no difference as far as compared to the pi2.The Pi2’s heat was bad but I think it was better.I never had it burn up or crash,only freeze.I did the same as you an burned my first one with the same psu i used on the Pi2,that makes no sense.Poor hardware flaw.I run 5.9vat 3.7amps and have a so much cooling that it’s ridiculous.I am pulling more power to keep it cool,than powering the cpu it’s self.Now I am stable on the Pi3b+ a 1.577.I achieved this by using 7’s across every possible thing that is overclock able on the new system.I don’t crash,and I don’t get above 66degrees Fahrenheit.This set up is bigger than my 3000.00dollar desktop.It might be small,but it sure is hungry.But I love it none the less.